Khajuraho : Expression of an evolved civilization

Known to have one of the world’s oldest civilizations in its history, India has also been known as a land of mysticism and exotica. For centuries travelers have come here seeking its treasures both material and spiritual and have never left empty-handed. Today, more than ever, people come here from around the world to learn more about its culture and to gain in-depth knowledge of its ancient scriptures and way of living; yoga being quite the crowd-puller. But what has surprised and piqued the curiosity of the world most about India as they stepped foot here, is its unabashed sensuous history. For a coy country comfortably ensconced in arranged marriages and sexual prudery, the casual traveler has been left surprised by the incredibly sensuous sculptures adorning none other than its holy temple walls…

Many have debated over the importance and relevance of the curvaceous nymphs carved into the walls of Indian temples along with passionate scenes of love-making straight out of the pages of the famed Kamasutra. The reasons could be many; different experts have different views on this subject. The most common belief, though, is that the temples were carved to depict everything about human life – from wars that people fought at that time to routine daily chores and to, of course, the act of procreation. Increasing the race was highly encouraged and considered an act of celebration, which is also probably why it was joyously depicted in the sculptures. Moreover, it cannot be denied that these are also a  celebration of the human form, particularly the female form, apparent in the hundreds of full-figured, graceful apsaras that adorn the temple walls.

Nowhere are these sculptures more beautifully carved and depicted than on the temple walls of Khajuraho, which is an UNESCO World Heritage site. Built over a span of 200 years between 950 AD and 1150 AD, these magical monuments in sandstone are the epitome of India’s sensuous history. Here the wonderfully joyful and well-endowed nymphs are showcased going about their daily life with music and dance, sometimes putting on make-up or simply admiring themselves in a mirror. Images of couples in amorous embraces called Mithunas are particularly striking in their gracefulness and explicitness. Each temple houses hundreds of these beautiful sculptures, which are a veritable feast to the eyes. A visit to Khajuraho, therefore, is highly recommended to those who wish to experience the perfect blend of artistry on stone with aesthetic sensuality. 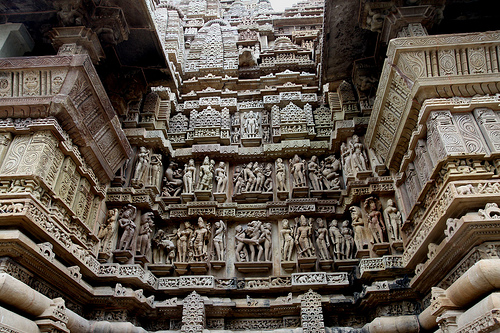 SLIDESHOW ► The Temples of Khajuraho

About Madhu & Savi: On their 10th anniversary, Madhu and Savi decided to try out something they had been dreaming of for a long time … a multi-year trip through India! Today, with the wealth of knowledge gained over the years, they are providing fellow travelers with custom designed trips to India, ensuring them a unique experience in a multi-faceted country that has so much to offer! www.10yearitch.com

A sensuous, romantic Valentine evening... in a Box?

"Chameleon" White: Chenin Blanc Pairings for Every Shade of Chenin